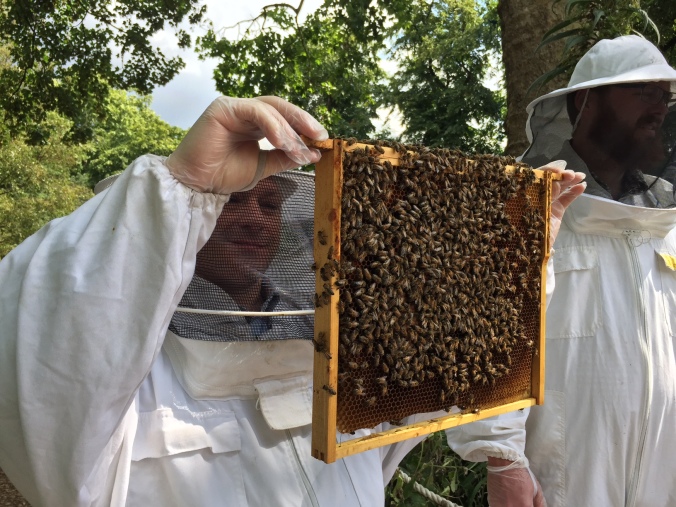 What do you buy the man who has everything? This is the problem I face every Christmas when trying to pick presents for my husband. He loves shopping and has a birthday soon after Christmas so it’s a tough job thinking of original gifts.

Luckily he has lots of hobbies and also aspirations to own a smallholding in the country so when I saw the Hiver Experience – Urban Beekeeping and Craft Beer Tasting advertised, I thought Bingo!

Now a few years ago I took him on a Bee and Chicken keeping course at Bourne Place in Kent.   It was great,we met some adorable chickens but we didn’t get to meet any bees or drink beer!

I first heard of Hiver a while ago and although I am not always a fan of beer with things added – fruit, chocolate, chilli etc when it’s done well the results are fantastic. Hiver don’t add honey at the end of the brewing process but add it for the fermentation. The result is subtle notes rather than overly sweet beer.

So last Saturday we headed to Bee Urban in Kennington Park. Really easy to get to just a few minutes from Kennington tube station, we were greeted by the lovely Floriane who along with Beekeeper Barnaby looked after us.

The two hour session started with a talk from Barnaby who explained about the hive inspection we would make and showed us a few of the tools used by bee keepers. 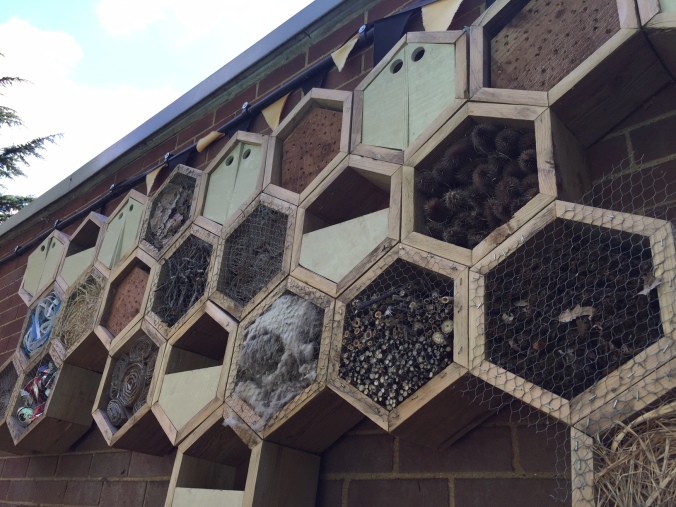 I should add at this point that I am terrified of bees, wasps, spiders , daddy long legs in fact anything smaller than a cat freaks me out a little but particularly all things bug size that fly and/or sting . So when Floriane explained how during the hive inspection we should hold the frames, despite her calm reassuring manner I felt a tad nervous.

I sometimes tell myself that it’s good to do things that scare me plus in this instance I reasoned I would at least get some beer at the end of it !

So clad in our beekeeper suits looking a little like telly tubbies we went with Barnaby to the hives. 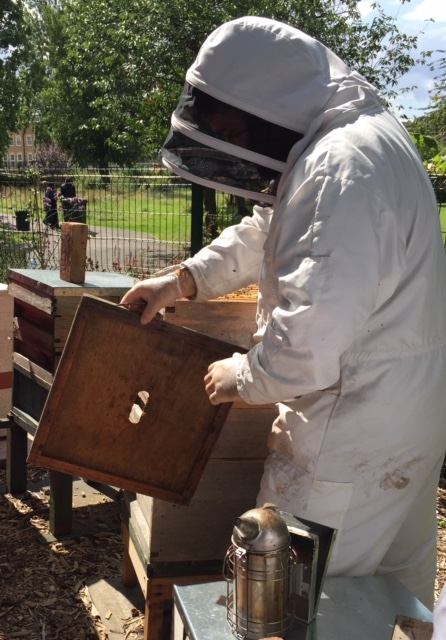 Barnaby opened a hive and passed the frames around one by one pointing out the various cells and types of bees. I took the first few frames remembering Floriane’s instructions. Despite being nervous of passing the frames I soon felt at home with the bees buzzing around me and actually enjoyed observing them close up.

To be honest I felt safe in my bee suit and looking at the bees was fascinating but I was convinced I would drop one of the frames and hurt all the bees. They are such amazing little creatures ! 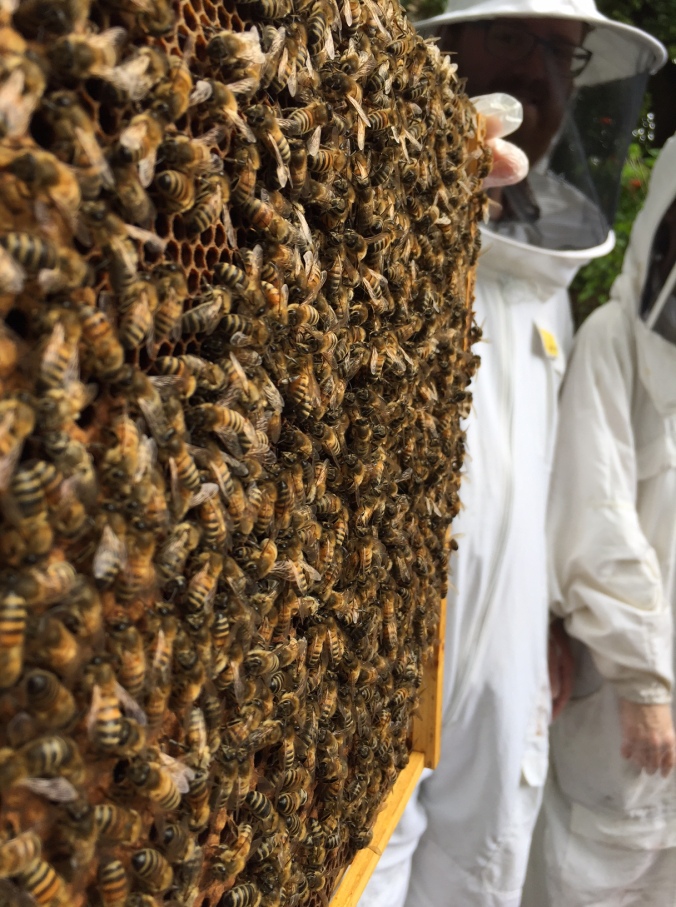 Once out of our beekeeping suits and in the safety of a nearby gazebo Floriane gave us a talk on the Hiver Beers including a beer and food pairing.

First we had the Hiver Honey Beer.   Described on the bottle as a ‘British Blond Beer’ this has an ABV of 4.5%.  Golden Blond in colour with a creamy white head consisting of tiny bubbles, this Blond has an interesting nose of honey and malt.   The local honey used in this beer which we also got to try gives this Blond subtle floral notes of elderflower.  There is just enough natural carbonation to give a tingle on the tongue and the honey notes are subtle throughout.

Refreshing and very drinkable the Blond paired beautifully with the manchego cheese we were given.

We then had Hiver’s Honey Ale, a British Brown Ale also 4.5% .   Containing Blossom and Heather honey the Brown Ale is actually more of an inviting reddish brown with a creamy loose head.   The nose has malt with medicinal notes from the honey.

Like the Blond, the honey notes although present throughout are subtle.  However in the Brown the honey gives more depth with caramel and fruit notes. The roasted notes from the darker malts also came through making this a rich but balanced Ale.

Good with the salami we had been given I felt the Brown Ale complimented the fruit loaf fantastically.

Floriane’s knowledge of beer , bees and honey was brilliant and made for a really enjoyable tasting session.

Bee Urban are a community project who are involved with educational work. I’m sure you’ve heard how important bees are to the environment and our survival but if like me you are nervous of these little fellas a visit to Bee Urban will give you a new respect and fondness for bees and the amazing work they do. For example Floriane told us that during it’s lifetime a bee will produce just around half a teaspoon of honey – yes just half a teaspoon and they never stop working!

As well as introducing me to some great Honey Beers, the Hiver Experience helped rid me of my fear of bees.  If however you really can’t face meeting the bees Hiver have a tap room in Stanworth Street near Tower Bridge so you could cut out the middle bee and head there to enjoy some Hiver Beers .

Wherever you try Hiver beer however remember how hard the bees work and savour every mouthful! 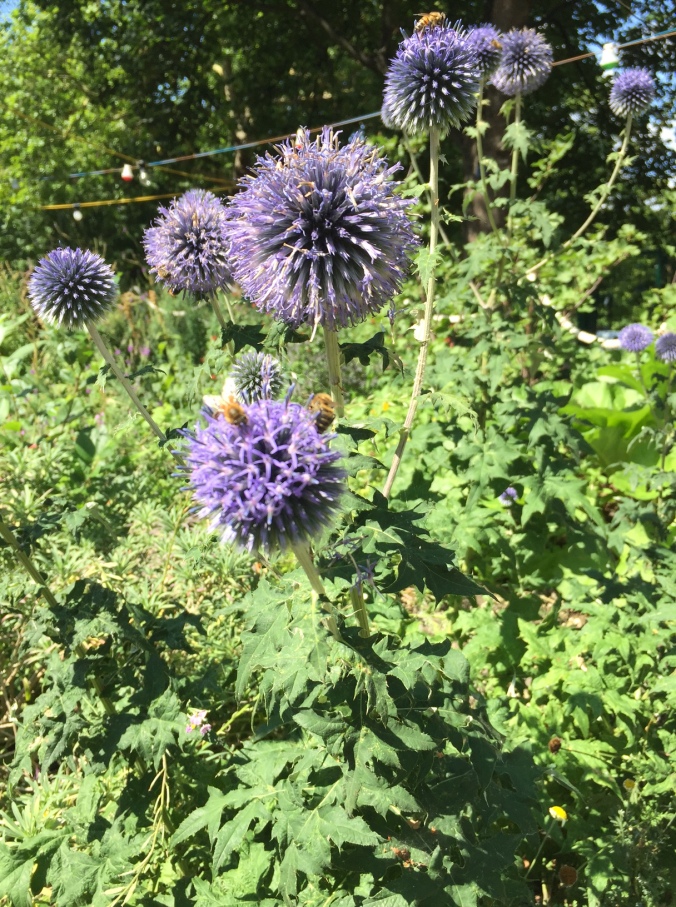