Sometimes the old adage ‘If it aint broke, don’t fix it’ doesn’t ring true and this I would say is the case for Cornish Brewery Skinner’s who in recent months have given their beers a funky new look.

I love Cornwall. I have visited many many times and always find it hard to leave this wonderful county. Well I say county but as an outsider my observation is that being ‘Cornish’ is in fact an approach to life – an ethos if you like. Economic factors and the wildness of the weather can make life in Cornwall tough. Many of the people I have met in Cornwall possess a pragmatic yet almost spiritual approach to life. This paired with the creativity which seems to ooze from every corner of Cornwall make it a spellbinding place.

The new labels are little works of art!

In this creative vein Skinner’s have collaborated with six artists to produce a new set of labels for their award winning core range. Skinner’s, a family run brewery just outside Truro town centre have been going since 1997. The new labels they have created are little works of art!

The artists include Stevie Gee who has designed for Fashion brand Vans, Rose Forshall whose work has featured in The Times and in one of my favourite shops Anthropology plus Nick Beringer who having designed the original Betty Stogs has given her a makeover – well of sorts. Nick has been involved in Skinner’s since it began so knows Betty well and rather than glam her up (perish the thought) this brazen woman has been given a new sparkle and is now shown holding court rather than the lone figure she once was.

So let me take you down the A303, past Stonehenge into Kernow and to a selection of Skinner’s wonderful beers, their swanky new labels and the stories and backdrop that inspired them.

First up the woman herself Betty Stogs. Cornwall is known for being the land of myth and legend and the story of Betty Stogs is one of a somewhat lazy woman whose baby was always grubby and had only Betty’s cat for company most of the time. One day the ‘Small People’ took the baby and cleaned it up before leaving it on some moss for Betty to find. Not before Betty’s husband had returned home however and he was pretty angry with her.

This story has a happy ending as Betty learnt from this episode and became a more attentive parent.

Described by Skinner’s as a ‘Brazen Cornish Ale’ this Betty Stogs however is in no way shabby. Amber with a lacy head and a 4% ABV she has a nose of caramel and malt. Once you start drinking Betty the malt notes continue accompanied by dry woody notes. I would love to sip Betty Stogs with a Cornish Pasty – of course. Either traditional or cheese and onion would work. Just beware of the seagulls and maybe the mythical ‘Small People’!

Fancy something lighter for a day on the beach? Try Skinner’s Lushingtons Sunshine Pale Ale.

Now in my experience the weather in Cornwall, even at the height of summer can be a bit hit and miss and I know having lost my car in the terrible Boscastle flood twelve years ago. But when the sun shines and it does, there is nowhere better to be than on a Cornish beach such as Crackington Haven or Trebarwith Strand with a Cornish Ice Cream.

Lushingtons Sunshine Pale Ale has a wonderful new label reminiscent of a Hawaiian shirt- you know the sort worn by some of us in the 80s and often seen at the GBBF.

The label sets the scene perfectly depicting blue sea surrounded by orange and red skies.
Lushingtons has an ABV of 4.2%. Grassy and hoppy on the nose, this beer does not have a heavy mouth feel so is a great session beer. With jammy notes and hints of lime it’s perfect with that Ice Cream or a Cream Tea.

Step things up a notch to an ABV of 4.8% with i, which Skinner’s describe as an ‘Untameable Pale Ale’. Very lively out of the bottle Porthleven has a citrus kick that hits the back of the mouth.

Skinner’s recommend Porthleven be paired with spicy food, kebabs or smoked meats – I love a brewery that include informed food pairing notes on their labels so kudos to Skinner’s for this. I would enjoy kicking back and watching surfers such as the one on the label in the Cornish sunset with a Porthleven and either fish and chips or some locally caught Mackerel-perfect! I guess the ‘untameable’ reference is a nod to the Atlantic. Famed for surfing but is certainly not a force man will ever tame no matter how well we surf.

All I would need to finish off the perfect day would be a visit to the Cobweb Inn, Boscastle for a few more beers and some live music. If you are in the area the Cobweb is one of the best pubs I have ever been to and worth spending at least one evening in. The evening may well turn into the following day but a full Cornish breakfast and a bracing stroll on the beach and you’ll be as right as rain.

Once recovered should you fancy picnicking on some sandwiches of locally caught crab I would suggest you grab a bottle of Cornish Knocker.

Skinners describe Knocker as a ‘Ground breaking Golden Ale’ which is a clever play on words. Named after fabled creatures that feature in Celtic mythology but are particularly prevalent in Cornish folklore, the Knockers were said to knock on the walls of mines. This knocking was believed by some to be a mischievous act designed to cause the wall to cave in (hence the ‘ground breaking reference). Others however believe it to be a benevolent warning to miners that they were in danger. I feel the need to explain this in case you have images from old fashioned seaside post cards in your head…

Cornish Knocker is Skinner’s Golden Ale with an ABV of 4.5%. Mango aromas lead to a crisp, fruity ale with a short snappy dry finish.

As well as collaborating with artist, Skinner’s worked with Hugh Fearnley-Whittingstall of River Cottage and came up with English Pale Ale (EPA)

EPA has floral notes from the cascade hops it contains. It also manages to combine notes of wood and malt. The result is a nice mix of sappy dryness and a soft woody finish. For me a perfect partner to a lump of Cornish farmhouse cheese. 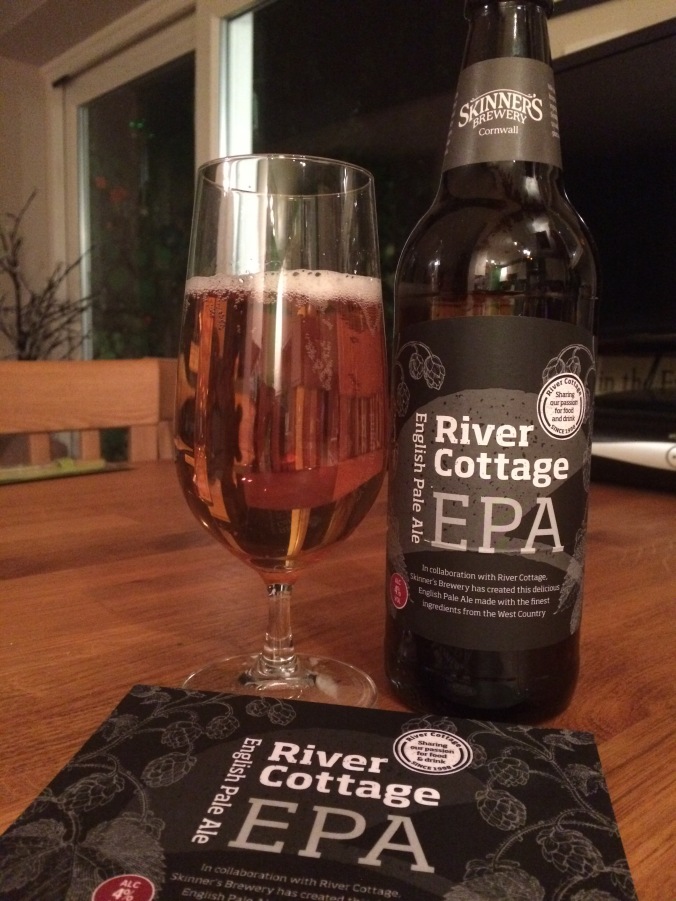 So many great things come out of Cornwall and beer is certainly one of them. Skinner’s range with their witty and clever new labels does not disappoint and although widely available don’t wait for them to come to you. If you have a chance to visit GO WEST!